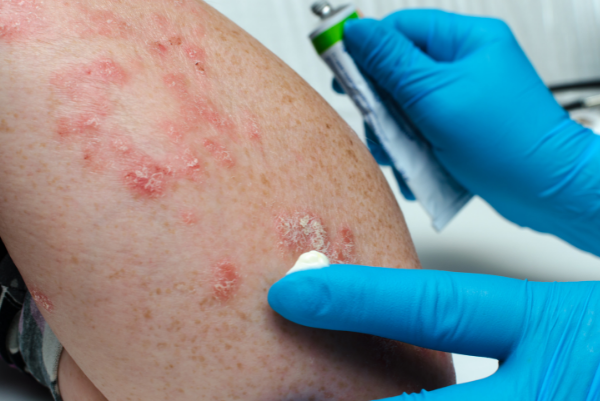 Get Relieved of the Discomfort with Medical Treatments

An Overview of Psoriasis

Our body is made up of a million of cells. These cells continuously divide. New cells are formed, and old cells are replaced. This formation and replacement of cells is a complex process. Sometimes, the immune system of the body starts acting hyper actively due to which new cells are formed at a greater pace. Psoriasis is a skin condition that is caused due to this. The skin cells start forming at a ten times greater pace. The old cells build up and appear on the skin as red patches with silvery or white flakes.

There are many different types of psoriasis and symptoms depend on what type you are affected with. The common symptoms that are found in a person affected by psoriasis are red, dry and flaky skin plaques covered with thick, silvery flakes, itching, burning and soreness in the affected part of skin. Sometimes the skin may also bleed.

Psoriasis can also attack your scalp. Scalp inflammation, redness, dryness, formation of flakes, excessive dandruff and itchiness are common sights that indicate a psoriasis of the scalp. You must also closely observe your nails. The nails may form yellow patches, which is often confused with fungal infection. Nails may discolor and get pitted or may begin to crumble or detach from the nail bed.

Psoriasis can be diagnosed with simple physical examination and knowing about the family and medical history of the patient. Sometimes the doctor may recommend a skin biopsy, to test your skin under a microscope. This is just to make sure that there is no other skin infection as psoriasis often triggers other auto-immune diseases.

Psoriasis is an incurable disease, but thankfully there are many treatment options that can control the situation and relieve the patients of the discomfort and distress. There are numerous topical and systemic medical treatment that can be opted by the dermatologist to treat the patient.
Topical treatments are applied directly over the affected area and used to treat mild to moderate psoriasis. There are many options the doctor may choose from.

These are vitamin A derivatives which help in reducing skin inflammation. However, they may cause some skin irritation. Retinoids are also available as pills, but these are recommended in extreme cases because of their inherent side effects. Retinoids are never recommended to pregnant women, or women who are planning a pregnancy, or are breast feeding, because they can cause serious birth defects.

A derivative of coal, it is a very effective solution to reduce the redness and itchiness. It is available in many shampoos, soaps and creams that can be bought over the counter. You can get it in higher concentrations through prescription.

It helps to slow down the cell growth and aids in smoothing of the skin by removing the scales. However, it is not applied for longer period of time and is washed off after some time of application. It is usually used as a contact therapy treatment.

The patients can also be recommended Vitamin D analogues to reduce cell growth. Creams, gels and lotions containing salicylic acid can also be applied to relieve of the condition. Psoriasis is most triggered due to dry skin, so the patients must keep their skin moisturized. Moisturizers may not help with reducing or controlling the problem, but they do help in relieving the patient of the pain and discomfort.

These topical treatments are effective in treating mild to moderate psoriasis, but in severe cases, topical treatments alone are of less help. The doctors usually combine these treatments with various systemic medical treatments to obtain quick and better results. The treatments can be oral or given in form of shots. Retinoids, methotrexates and cyclosporins are generally used to supress the immune system and reduce the cell growth. However, these have side effects and must be used with caution. The doctor shall keep a close watch on you while putting you up on these oral treatments.

Psoriasis is a chronic disease and can lead to many other conditions such as diabetes, heart failure or liver problems. Many times it is also associated with low self-esteem and depression because people cut themselves off from the social ties because of the appearance of the skin. But it can be treated, and many times the outbreaks subside and go for the good. We have all these treatments available and we suggest you the best combinations of treatments that will keep you free from the risks and side effects. Psoriasis can take a critical form if not treated timely. So, if you are facing any symptoms, its time you book an appointment and receive a treatment that will suit you and relieve you of the problem, pain and discomfort!